Location of the Northern Orifice

The clip from which these stills are taken is at:

We will point out that the protrusion to the upper left of the red circle is the Russian peninsula Severnaya  Zemlya and Northland, and to the bottom right is the Canadian side of Baffin Bay. It just peeks out a bit and is brownish.

Below the three stills, I have some other unique and original comments to make, and a conclusion, so do come back if you go see the clip.

Just as a reinforcement, below, the reader will find an image that was passed on to me by Rod M. Cluff of the opening from farther out in orbit. There doesn't seem to be any cloud cover, and the location of the opening itself is clearly seen.

Rodney M. Cluff: "My estimate of the location of the North Polar opening is 85* North latitude, 130* East latitude based on imagery ... as it appears in the Advanced Microwave Scanning Radiometer on NASA's Aqua Satellite, dated February 25, 2011; but it is not the big black dot which marks the North Pole, which is a dot from the satellite imagery. Rather, it is the blue spot near Northland, Russia, which is an orifice in the ice - the North Polar Opening". (It is the bluish spot just above the red line)

Rod also posted the image below, in jpg format, "based on imagery emitted by the U.S. Naval Observatory October 25, 2015".

Rod's site is listed at the bottom of this page. 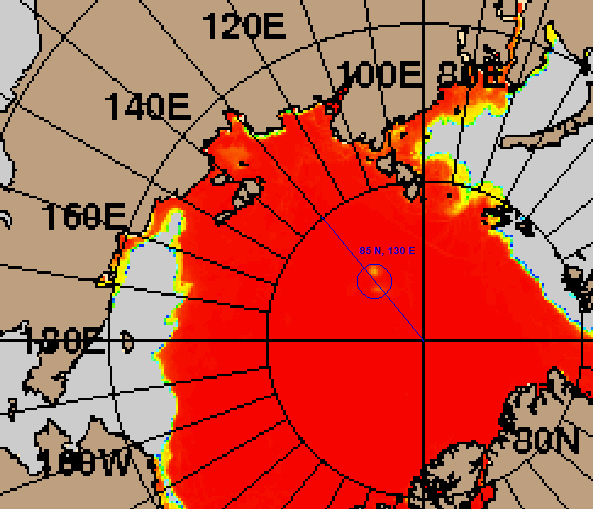 The reader might harbor doubts regarding the fact the the orifice is so circular and full of mist, as seen in the top three images. But please examine these three images below of the Martian North Pole, of the depression and opening, as a comparitive reference. I say this because the Martian North Pole and orifice consists of a huge crater having sheer walls and deep chasms on the crater floor; but it also fills up with mist in a circular fashion. Explanations are at the top of the images.

Here is the Martian North Pole depression wherein the Martian orifice is located. It was fairly clear of mist or ice at the time of this image.

Below is the end point of one of the rilles. Notice the depth! So it truly is an opening.

In the image below, it is full of mist. Obviously, ice didn't quickly form and fill the crater a few miles thick; so it has to be mist that formed when the warmer, humid air from within encountered the cooler air of the surface, and condensed.

Conclusion: With reference to the Japanese weather satellite images of the Earth's northern orifice, at the top; we shouldn't be surprised that the whitish opening is so circular because that's the way the opening is on Mars, too. And the fact that the depression is filled with mist whose tone contrasts with the surrounding ice (and the bluish ocean of the third image) is also understandable for the same reason; that reason being that the warmer, humid air from within encounters the cooler Arctic air and forms a foggy mist, just as it does in the Mars image immediately above.